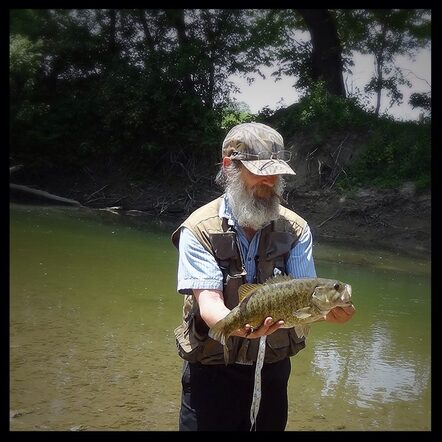 ANGLERS HOPE TO CATCH ONE LIKE THIS CAUGHT IN 2016! ONE OF THE BEST FISH EVERY CAUGHT IN NAPRA COMPETITION!!!!!

Stage 1-
Eckstein Claims Event #1
What a way for a rookie to start his tenure in the NAPRA Lee's Lunker Series (Elite). Steve Eckstein edged NAPRA vet Pete Ziehler by 1/2" to claim the first stop in the North's 2022 season. His 58" included a 14.25" and 12.75". Ziehler, managed a fish on his second cast, a nice 13.75" and later a 14" fish but just fell short of his first victory in 2 years. Ralph Evans finished 3rd with 53". Thank you to NAPRA sponsors Pap’s Jerky, Cast Cray Outdoors, Big Hammer Lures, and Natural Forage Baits for providing prizes for the North! 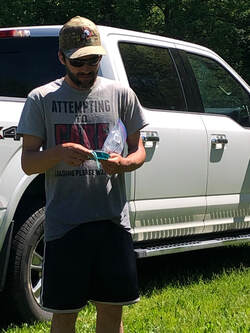 Stage 2-
A Rookie wins again!
Everett Sheets was above to crack the code of a new river and tough conditions to dominate the North Elite #2 event held in Covington. His 67.25" including a big fish of 14.5 paced the field. A close second was Charles Brannam with 64.50" including a 16" bass. Third was Dave Schaller with 59" followed by Marvin Reynolds with 51.75.
1- Everett Sheets 67.25
2- Charles Brannam 64.5
3- Dave Schaller 59
4- Marvin Reynolds 51.25
5- Steve Eckstein 50
6- Pete Ziehler 10
7- Austin Stumbo 9.5
8 Ralph Evans 9
9- Cole Ward 0
Stage 3-
NAPRA NEWS: NAPRA Lee's Lunker Series (Elite) North Division Stage 3 Results
With 90 minutes of fishing down and 1 fish to show for Pete Ziehler reverted back to familiar grounds just east of Bellbrook to try to end a two year plus drought. Using a Pradco Outdoor Brands variety of gear he managed to score just enough to edge Ralph Evans by 2 inches. Ziehler was able to get a big hit using a Bomber Lures white Bomber and secured a 13.75" to help him hold off Evans. Dave Schaller managed two fish to finish 3rd with 20.75".
This event was sponsored by Bubbakoo's Burritos, Franklin Pisanello's, Pro-Cure Bait Scents, and Tru-Turn Hooks. 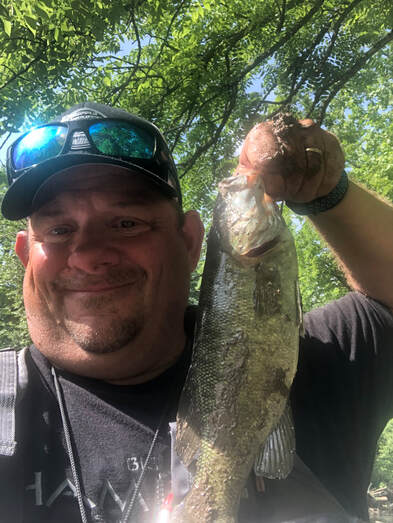 Stage 4-
NAPRA NAPRA Lee's Lunker Series (Elite) North Stage 4 Recap
Schaller Gets Early Hit And Holds On For Win
Dave Schaller started Stage 4 off with a bag catching a 13" bass and 10" in the first few moments. On a very tough stage 4 and double header for the North Elite Dave only needed 1 more fish to secure the win. His 46.75" bested second place angler Ralph Evan's 24.75 and Marvin Reynolds 10.5" bass. "Tough day but I fished in proximity of Dave and he had it dialed in. Proud of him" mentioned fellow angler Pete Ziehler. 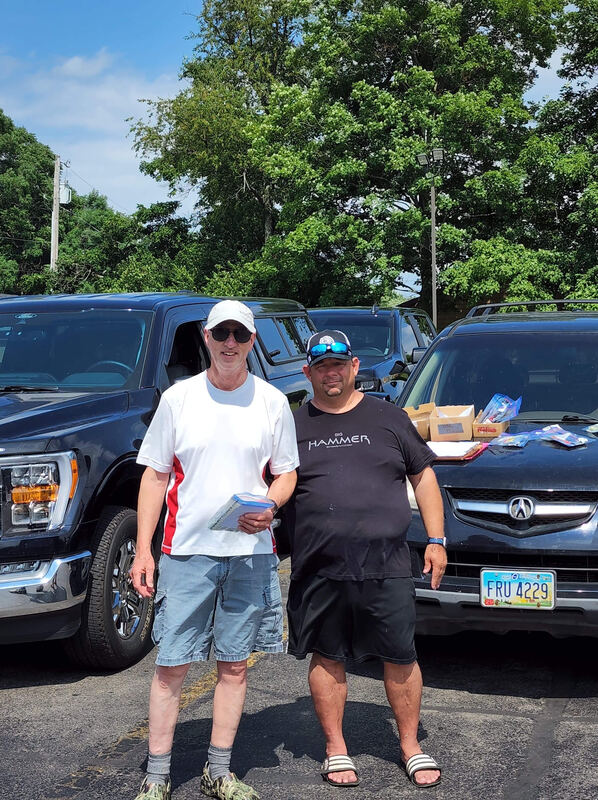 Stage 5-
NEW WATERS NO PROBLEM FOR STEVE ECKSTEIN
Fishing July 24th on the murky and rising waters of the GMR in Miami County Steve Eckstein managed two overcome his newness to the spots and win the Stage 5 event. His 56" included a 14" big bass for the event to edge Pete Ziehler's 53" for second. Third was Ralph Evans with 50" followed by Marvin Reynolds.
Stage 6-
REYNOLDS DIALS IN A NEEDED WIN! VAULTS TO LEADER IN NORTH STANDINGS
Not to discredit Marvin's impressive 59.50" of fish to win the Stage 6 event July 24th in Troy as part of the North doubleheader but the implosion of the top two in the standings secured not only a win for Marvin but surely a great chance to win the division. His totals edged Steve Eckstein's 48.75" while Ralph's pictures wouldn't work (thus a zero) while Ziehler caught nothing but frustration but no keepers.
Stage 7-
BRANNAM DOMINATES FIELD FOR STAGE 7 WIN!

CHARLES BRANNAM'S 18" bass set the pace for the North Division as his 73" of fish was almost a keeper size over fast charging Steve Eckstein. Steve hit a hole with a flurry and scored a bunch of fish while fishing partner Pete Ziehler watched and groaned  it would be a long day.  Steve's 66.75 was good for second while Dave Schaller (60") snuck past ZIehler for 3rd.  'Very happy for Charles and he is a force to be reckon with. Quiet, enjoys fishing and he is so good at it!". stated a fellow angler.

Stage 1-
Newell Culls 60.25" to Dominate the South
Aaron Newell found a sweet spot to claim the first stop in the South Trail. His 60.25" inches included a massive 17" fish to really set his limit above and beyond everybody! Second was Matt Wesley wiht 37.5" followed by Daniel Brown's 28.75". Both trails fished Twin Creek and stated the water was fast and very tough but agreed the best is sure to come as the season goes on. Thanks to Palmer's Custom Baits, Silvercreek Bait Co., Fricker's Miller Lane, and Liquid Mayhem for provding prizes for the first stop in the South Trail.
STAGE 2-
​NAPRA NEWS: Craig wins South #2 at Twin!
David Craig battled tough conditions to rebound from a tough first event to win the second stage for the South Elite. His 66.75" included an 18" bass to pace the field. Second was Aaron Newell with 53.25 followed by Tony Heralds nice 49" limit.
The South will fish the Stillwater in West Milton next Sunday.
1- Dave Craig 66
2- Aaron Newell 53.25
3- Tony Herald 49
4- Daniel Brown 24.75
5- Travis Lakes 23.50
6- Ben Burton 13.75
7- Matt Wesley 8.75
8- Justin Demongone 0
​
Stage 3-

Travis Lakes got off to a great start fishing a quiet stretch of the LMR and quickly pocketed enough fish to win the State 3 event in Bellbrook. Travis's 66.5" bested David Craig's 59.25 and Tony Herald's 21.5. Travis was elated he found the right number and surely put himself back into the South Standings Race and AOY Race.

Stage 4-
NAPRA NEWS: NAPRA Lee's Lunker Series (Elite) Stage 4 Results
SOUTH DIVISION
Craig Continues To Heat Up as NAPRA reaches the Half Way Point
On a very hard day for fishing David Craig's 72.25 edged Aaron Newell's 69.25" to win the Stage 4 event. A pre cursor for the Wade War, both top two anglers hit different portions of the LMR but found the fish. Travis Lakes hoped to repeat his magic from stage 3 and his 61.26" was a great total for 3rd place. This event was sponsored by Big Hammer Lures, Liquid Mayhem, lurenet.com, and Snack Daddy Lures. 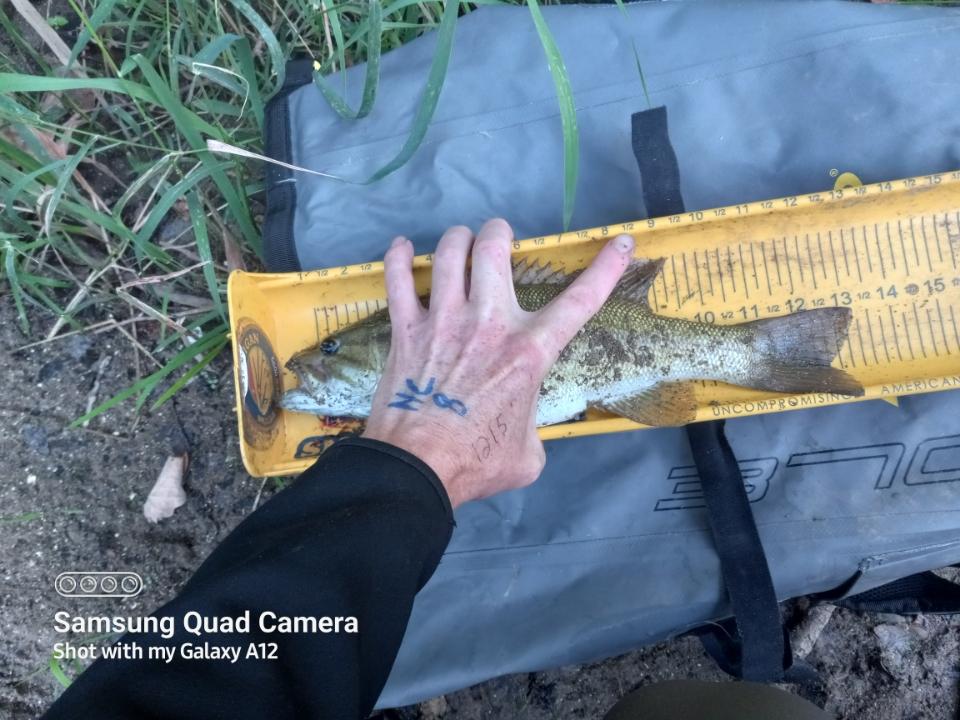 Stage 5 and 6
NEWELL GOES TWO FOR TWO on the STILLWATER
Setting possibly a record for two events back to back Aaron Newell caught 80" (YES 80") and 77.25" to win both stages on July 24th. His impressive bags was pretty much standard for all the South on a very productive day. David Craig finished second in both events (60.25" and 62") while Daniel Brown's 59.25" and 52.50" were good for third in both events. 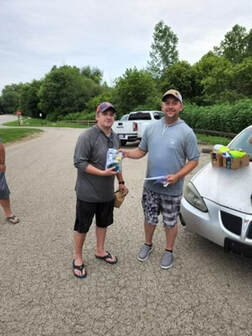 Stage 7-
CRAIG WINS FINAL STAGE TO SET UP BATTLE FOR AOY WITH NEWELL!

David Craig went 2 for 2 and won the 7th stage of the South Elite's 2022 event. His 76" bested the entire field and put him closer to closing the gap between current AOY leader Aaron Newell. Newell's 73" was good for second. Travis Lakes had an impressive day with 66.75" and was 3rd in the event.
Powered by