napra is asking its members to name two finalists maximum for its 2022 r.o.h. finalists list.  here is a quick bio of each since most members will not be aware of what they have done for napra. please vote by may 1st... 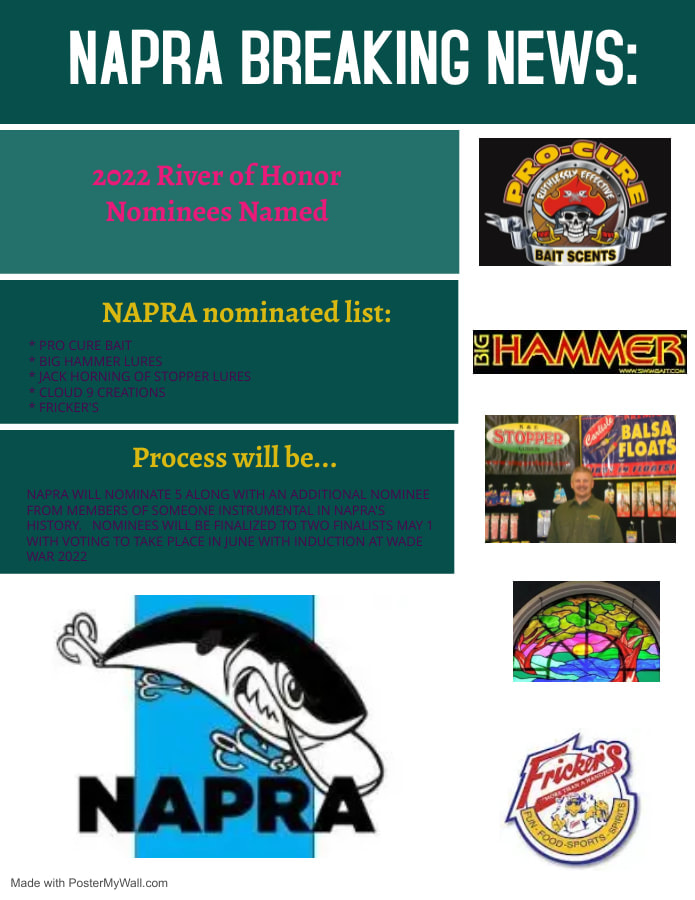 February 1st---- Release of  semi finalists (6)
May 1st--  4 Finalists for  2021 Members Choice
July 1st-- 1  will be named new member of ROH....
September TBD-  Ceremony for Honorees
​
*** To be nominated Members must have been with NAPRA for at least 3 seasons, be retired from ELITE competition,  showcase NAPRA in a positive light, and won at least 1 major award/title.  Colleagues and sponsors must have been part of NAPRA for at least 2 seasons.

NAPRA's River of Honor will have another awesome company joining its ranks. The Hall of Fame currently consists of Snack Daddy Lures, Maniac Custom Lures, Karl Halley, and Hope Taft but will be joined by an awesome local landmark....Frickers's Miller Lane
Fricker's has hosted NAPRA's First Cast and multitude of events since 2008. Always with a great smile, service and food, Fricker's has intertwined itself into the thread of NAPRA for many years and years to come. Congrats to the Fricker's family for joining us in our River of Honor!
Final voting:
~~ Must have 30 pts to be a finalist
~~ Nominees may stay on the ballot for 5 years
~~ Vote breakdown is 5,3,2, and 1 pt for first choice through fourth
FINAL TALLY:
Fricker's 34 pts (3 first place votes)
-- Missing the cut --
Pro Cure 27 pts (3 first place votes)
Big Hammer Lures 19 pts
Jack Horning 17 pts (3 first place votes)
Cloud 9 Creations 13 pts (1 first place vote)